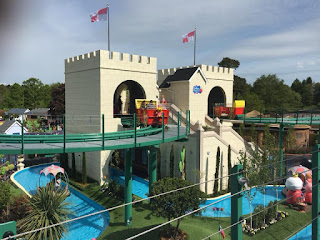 We were recently sent a Royal Invitation and last Friday we visited Paultons Park for an exclusive sneak preview of the two new rides at Peppa Pig World, Grampy Rabbit's sailing club and The Queen's Coach Ride which open on May 16th 2018. 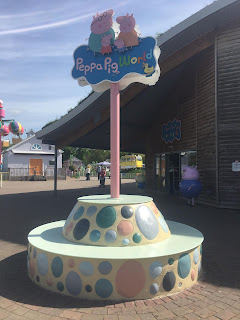 The newest and first extension to Peppa Pig World since it first opened in 2011 is an amazing new addition to an already very popular attraction for families.

When we visited on Friday we were greeted at the entrance to Paultons Park and we were given over special guest lanyards which allowed us access to the two new rides which were still separated from the rest of the park to all guests except those visiting for the preview days. We were a little early to access the new rides and the park had just opened so we took the opportunity to jump on a couple of the other rides first. The queues were very small at this time and we didn't have to wait for long in each queue although Peppa Pig World was getting busy quite quickly.

After we had jumped aboard Peppa's Big Balloon Ride and Miss Rabbit's helicopter flight it was time to head over to the new rides. We were all very excited to have this sneak preview and Thing 4 and 5 were running ahead to get there as quickly as they could. As the new rides were still secured off to the public until May 16th's grand opening we headed around to the entrance. 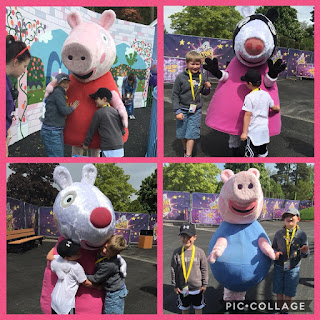 We were greeted by the lovely team who handed us a fab goody bag full of Peppa Pig themed gifts which the children were super thrilled with and we headed around to the rides. The new rides are an amazing addition to the park and take up a good amount of space within Peppa Pig World. From The Queen's Coach Ride up high you can see Grampy Rabbit's sailing club below you and you also have a great view of the rest of the park.

After saying a quick Hello to Peppa and George who were walking around meeting and greeting us all we headed to The Queen's Coach Ride first. Nestled inside the Queen's castle you have to go upstairs in the castle where you hop aboard one of her very lovely and colourful coaches for a trip around the park area. Travelling from the castle above and around the sailing club ride, taking in the views as you go and back to the castle again. 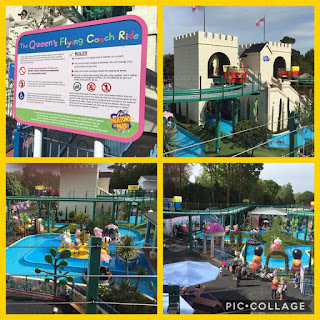 Thing 4 and 5 loved this ride, it's so high up and you get to look at all of the other rides in Peppa Pig World, they were looking to see which rides we hadn't been on and seeing which characters they could spot as we were so high up, it was a great view point as well as a fab ride.

After that we headed back down the stairs from the castle and grabbed a drink as well as a lovely Peppa Pig themed cupcake and had a quick Hello from The German Wife, another lovely blogger who I have met before but it has been a long time since we had seen each other so that was nice. 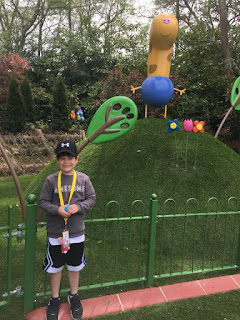 After a quick picture with Gerald the Giraffe, one of the many new characters featured in the new part of the park, we headed to Grampy Rabbit's sailing club. The queuing area takes you over a small bridge and down to where the boats arrive. There is enough seating for four people in each boat and it takes you around a lovely scenic route taking in a picnic scene with Peppa characters as well as the scene where Grampy Rabbit fell asleep on his boat and left the children on Pirate Island! 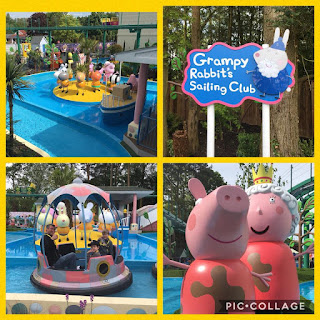 We loved this ride too, it's a gentle water ride which also spins too as you go around so you get full view of everything that there is to see.

As well as introducing these two new rides into the park they have also incorporated another eatery underneath the Queens castle as well as more facilities for everyone nearby.

After we had seen the two fantastic new rides we headed out to enjoy the rest of the park which has so much to offer. With the new Little Africa area next to Peppa Pig World and the Lost Kingdom with all it's dinosaur themed rides we had so much to see and do. Thing 4 loved the Wave Runner ride as well as the faster rides such as Velociraptor and Flight of the Pterosaur. Thing 5 is still scared of these faster rides so whilst Dadof5 took Thing 4 to enjoy the rides myself and Thing 5 were happy with Percy's Play Park and if it had been slightly warmer he would definitely have been in the Water Kingdom too.

With the ability to pop back to the new Peppa Pig World rides whenever we wanted to we went back around three times in total trying out the new rides on each visit back. We made sure the new rides were our last stop before we left the park too and we lasted until almost park closing time at 5pm. Thing 4 and Thing 5 had an amazing day and were completely exhausted but very happy. 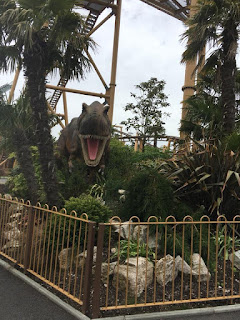 One of the dinosaurs in the Lost Kingdom