10 hours after the birth of four out of five of my children I was at home too. I shuffled out of the local hospital, pulling a suitcase full of stuff, most of which hadn't been used. I was walking like John Wayne and still looked nine months pregnant.

With our last child it was 5am, the birds were just waking up, it was eerily quiet yet it was a special time. The start of a new life and a new day, it felt good. I was on a high, probably the after effects of the gas and air, but I felt elated. I had just spent 2 hours in hospital, in labour, given birth and I couldn't give a flying monkeys what I looked like.

Anyone seeing me walk out of that hospital didn't recoiled in horror at the sight of me but cooed over the tiny bundle we had in the car seat and looked at me with a sympathetic eye as they congratulated me. I swear most of the people I walked past in the A & E department on my way out were sat there on my way in earlier, they needed sympathy more than I did!

So, on to Kate Middleton. The stunningly beautiful wife to Prince William and Mummy to Prince George and the newest arrival Princess Charlotte. We are talking high profile now aren't we? Not;

Headline; 'Mumof5StaySane gives birth as the world's media looks on',

Breaking News; 'Mumof5StaySane waddles home from hospital and hopes the OH has ordered in a Chinese for tea'

Exclusive; 'Mumof5StaySane shuns the traditional jogger and tee new Mum combo and dares to wear a pair of jeans on exit from maternity wing' 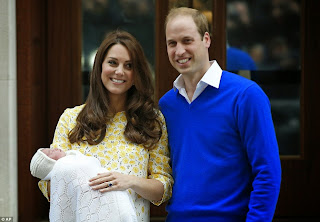 Kate and William letting the world get a glimpse of the new Princess, May 2nd 2015


We are talking royalty and, unfortunately for Kate, it means facing the world's media head on just 10 hours after giving birth. It was probably the last thing she wanted to do. She probably begged Prince William to sneak her out the back of the hospital just like Prince George did after his visit. She probably longed for the comfiest pair or tracksuit bottoms she could think of and would rather have had her parents to visit rather than a stylist and hairdresser. She didn't want to walk out of the Lindo Wing into a flurry of camera flashes and reporters shouting at her, why would she? 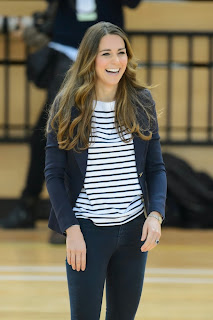 I am sure she fancied a look more like this, still looking stunning but more comfy!

So to the haters and the moaners who probably wouldn't have been happy either way. If she had come out in joggers you would have moaned she looked rough, although I can't believe Kate could look rough in anything. You moaned she came out in a gorgeous Jenny Packham dress and heels but lets face it, if we had 20 million cameras on us as we left the hospital we would want a stylist and hairdresser too.

Lastly, I am 100% certain you would have moaned if she had left and we hadn't had a glimpse of the new arrival at all and as a proud Mum, regardless of how awful she was feeling she let us in on the most proudest, important day of her and her families lives just to keep us happy.