Slimming World mushy pea curry recipe. A very quick and easy meal that is filling too.


I was told to give this Slimming World mushy pea curry recipe a try but I was a bit dubious like others are when I tell them about it. I have never tried mushy peas before but it's one of those things that you say you don't like even though you've never eaten it! My Dad used to always have them when we had a fish and chip takeaway and I always thought they didn't look nice and I was never one to choose garden peas when it came to having vegetables with my tea anyway.

However, when mushy pea curry was mentioned to me I had to give it a try. I was struggling to cook Slimming World recipes that were quick and easy and I needed inspiration. The mushy pea curry had been mentioned by a few people and all had said it was lovely so I had to see if they were right. When I told the OH what we were having for dinner he turned his nose up too!

2 small white onions
3 garlic cloves (optional)
Sliced mushrooms (optional)
2 cans of mushy peas
1 can of chopped tomatoes
1 can of baked beans
1/2 to 1 tsp of chili powder depending on how you like it!
2 tbsp of curry powder

Spray a saucepan with frylight and add the 2 onions (diced), garlic cloves (crushed) and sliced mushrooms. Fry off those for around 10 minutes until they have browned and started cooking. Add in the curry powder and chili powder plus all of the tinned ingredients. Mix it all together well and let it simmer away for around 30 minutes. By the end of the cooking time it should be a lovely orangey colour.

When adding all of the different tinned foods it doesn't look particularly appealing. Mushy peas come out of the can in one solid mass and I really wasn't convinced at the beginning when I was putting it all into the saucepan. However, the proof was in the eating and both myself and the OH were impressed which is how I ended up cooking it a second time and probably for many more meals to come. 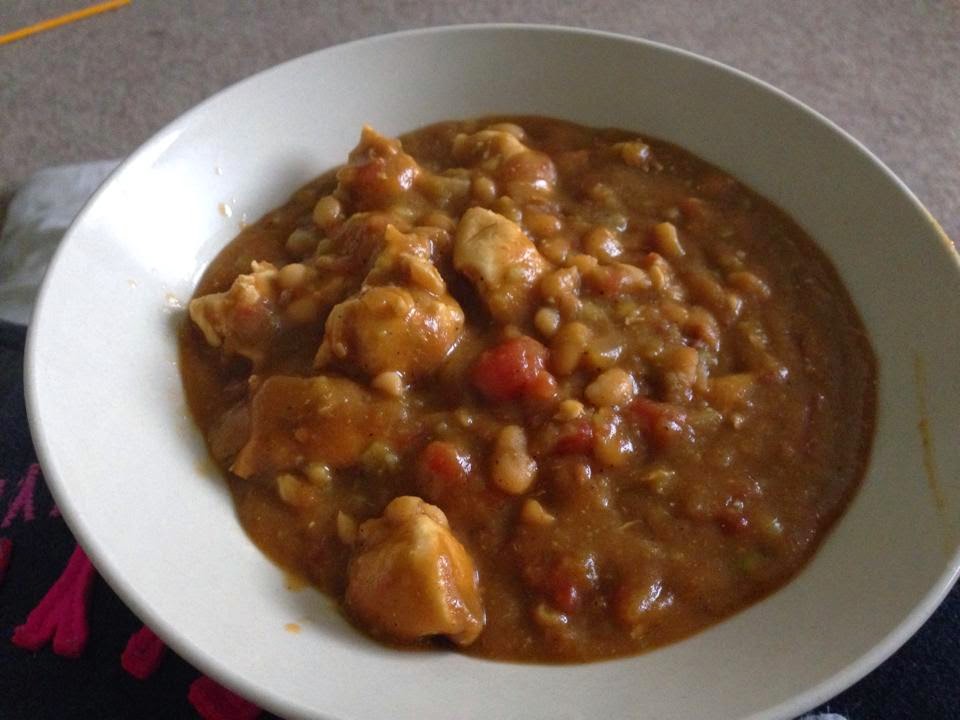 This is with some chicken added, although it is a very filling meal even without the chicken in.

With my first batch of mushy pea curry I had browned off some diced chicken in a separate pan and added it to the curry to cook through for half an hour. It was a nice addition but not necessarily needed as the mushy pea curry is very filling. It also makes a decent batch so there was plenty left for the next day for lunch or dinner again!

I've also been told that if you take some of the curry and blend it down into a thick sauce it becomes like a chip shop curry sauce which sounds perfect to dip some Slimming World chips into!

Have you tried the Slimming World mushy pea curry recipe yet?
Posted by Mumof5StaySane at January 03, 2020