Christenings, birthdays, NFL football trip. Surviving 'storms' and the lack of juice crisis for a 3 year old! Oh and the joys of finding a local pumpkin patch!

It's Monday. The clocks changed yesterday morning and so we were given an extra hour to listen to the children fighting with each other.

On Saturday we had a family christening to attend in London so we were all up, suited and booted and out of the house by 8.30am. By the time we got to St Paul's Cathedral, Bovington Number 5 was tired. So I spent most of the christening outside of the chapel doors peering through the glass and trying to listen in on proceedings because of a grumpy and tired baby. It was a lovely service and I tried my best to stay in rather than out of the service but it wasn't working. Grumpy babies and official proceedings just don't mix! Afterwards we had Afternoon Tea at a tea room nearby where we had even more of a meltdown from grumpy and severely overtired baby and we then left. Bundled them all in the car and tried to get out of London! Baby was asleep within seconds of leaving the car park, the 3 yr old soon followed in having an afternoon siesta as did the 10 yr old. At least the journey home was quiet!

In the evening we went to a birthday party for a friend of OH's. Not realizing it was a sit down meal but handy that we hadn't eaten dinner! There was also a photo booth to go in and take pictures with various hats, wigs, silly glasses and props which was good. We got to keep four photo's and then the company are making up a whole album of the pictures taken for the birthday girl. A really fab idea I thought. I have heard about the photo booths but never been to a party where there has been one and would highly recommend them, it's a good laugh and will make a lovely keepsake to look back on too. 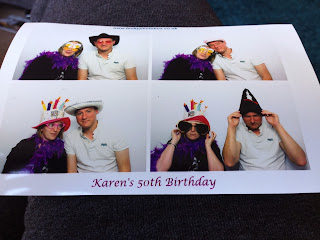 Our photo booth creations, it was fun and a fab idea for parties, weddings etc....

We have our own birthday countdown going on in the Bovington house. William is turning 4 at the end of the week. He has asked for a Darth Vader mask and Play Dough. We will have to wait and see! On the agenda is lunch out, a Batman cake and if William gets to choose it will definitely be bowling again with his Finding Nemo bowling ball. Just remember though, just because you walk into the bowling alley with your own ball it doesn't make you a pro!! It's William's favourite thing to do though and we end up there at every opportunity. 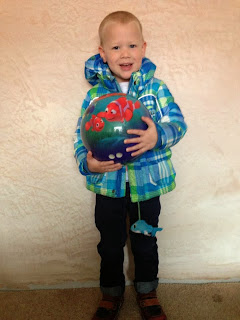 
Yesterday the OH, our eldest and OH's bestie went to watch the NFL game at Wembley. They had a fab time, it was booked so long ago but the wait was worth it. They had a fab time, enjoyed some American food before the match and we heard all about it the next morning. It turned into a very long day but definitely one they would like to repeat I think. 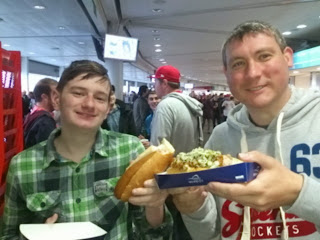 Enjoying a Wiener before the NFL match

Having survived the first day of Half Term and the 'storm' that hit we are now looking forward to the rest of the week. The storm wasn't as bad as anticipated but we did prepare ourselves after all of the news reports. It's best to be prepared and then hopefully not need it. I remembered back to the storm of 1987, I was 8 years old and myself, my sister and my brother all slept on our parents bedroom floor because of the noise outside. I was fully prepared to have all of ours in with us but we were very lucky to not be hit as bad as other parts of the country.

With the OH off work I am going to try and put him to work with doing done work on the 'still not finished, ongoing project' aka the extension. It still won't be finished before the youngest child moves out at this rate. We have also found a local farm that does pick your own pumpkin so that is our activity for tomorrow which William is very excited about. It will keep them busy and much more enjoyable than buying one from the supermarket. I am sure we will come back with more than one pumpkin as well!

Another task to contend with has been finding bridesmaids shoes for my two girls to wear for my sister's wedding. Over the Spring/Summer it would have been fine but trying to find wedding shoes in the shops at this time if year is like a Mum trying to go to the toilet without a child in tow! My Mum and I traipsed around a shopping centre last week and had no luck in every shop we looked in. My usual shoe shopping enthusiasm is wearing thin very fast and I usually love shoe shopping!

So there we have it. A busy weekend followed by Half Term with a few things planned and a feeling of 'will he, won't he' when it comes to OH and the extension work that needs to be done!

Hopefully the rest of the week goes well, unlike yesterday when William asked Daddy for some juice, when he was informed that there was none he exclaimed 'You've ruined my life'. Errrrr, slightly over dramatic, let's hope that nothing more serious than running out of juice happens or we could be in for the end of the world!
Posted by Mumof5StaySane at October 28, 2013