Weaning 'rocks', where's my socks and no need for toys when you have a cardboard box

Weaning, hurrah. We seem to have had a breakthrough. We were going for BLW (baby led weaning) as Blake seemed to prefer to put everything to his mouth himself rather than having a spoonful of mush forced upon him. So I started with sweet potato. Grab the whole sweet potato, stab it a few times with a fork, always a good thing to do when you have had a stressful day!, and then pop in the microwave for 5 minutes or so. Cut it in half and scoop out the flesh, to make it a bit mushier you can add in a bit of their milk. Anyway, I scooped out a quarter of the sweet potato and off I went, although our BLW plans were scuppered at the first hurdle by the lack of a highchair. So instead I went at him with a spoon again and luckily he ate, all of it. The leftover 3/4 of potato I put in the fridge and used the next day, and he finished off the whole 3/4 in one sitting. I think he liked it! We have also tried an apple and pear yoghurt which went down well too. So we have got there, we have made it over the first hurdle and now on to making sure we give him plenty of variety so he doesn't become fussy. I must also get a highchair asap so that he can feed himself too. It will be much easier and he prefers to do it himself.

So onto socks, or the lack of them. We don't lack in single socks on their own, in fact we could open a whole shop full of single socks but they have no friends. I have a whole washing basket full of socks yet every morning I hear the same question from 5 people, 'Where's my socks?'. I am sure if I went through the basket I would be able to come up with a good few pairs for everyone, but those socks all went into the wash in a pair so where did the other one go? Frustrating indeed, I buy everyone different socks so we know whose is whose but then it was suggested that if we all wore black socks it wouldn't matter which ones were paired with which, however keeping track of the various different sizes of black socks would do my head in just as much! It's another chore added on to all the others that need doing. I would ask William to help sort them but  he would probably bury himself in them instead, which wouldn't help.

Half Term is upon us. Although my eldest still has school because he has revision classes for his upcoming GCSE's, eeeek, and William still has nursery every morning. My 9 year old has gone off swimming with Nanny and Auntie today and then is staying there for the night which is lovely, it's so peaceful without here and her strops, tantrums, moods etc....! So what do you do in Half Term? I can never please everyone because of the age differences, plus still having the nursery run to do doesn't give us much time to do anything major. William found a cardboard box yesterday which I was about to throw away and he put it over his head. My brain suddenly, although very painfully, whirred into action and I knew exactly what I could do with the box. I was lucky enough to know where a tub of felt tip pens were, which is unusual for this house, and I got to work. 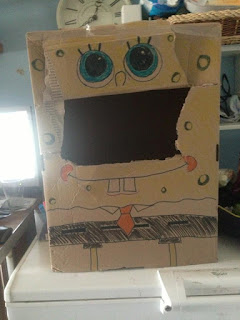 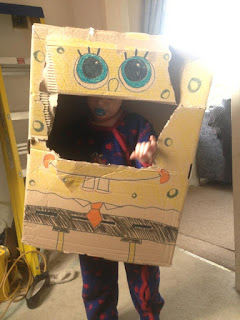 It's not that often we get creative in this house. The girls like to do little craft sets that you can buy in the shops. Here is a picture of another time I got creative as an entry into a competition, most of my friends will remember as I hounded them for weeks for votes, and I won a prize! This is my Blake 'bump'! 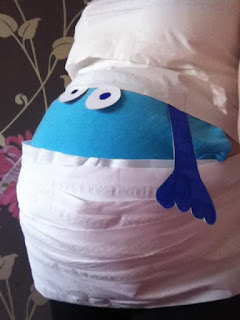 Time to go for today. I have been to Sainsburys to get Ella new clothes. 25% off started today so everyone get down there and grab some savings. William is raiding the fridge, Blake is asleep and everyone else is out. So I am going to try and grab a cuppa before they all come back and ruin my peace!

Oh and OH went to work with the pram in the car for the second day in a row, so I think I need a second pram to keep at home for such occasions, hint hint to the OH!

Offers cannot be used together.

P.S; By the time I wrote about a cup of tea further up and got to the end of my blog post, my eldest arrived home and Ella came back with a friend in tow. Farewell peaceful cup of tea!
Posted by Mumof5StaySane at February 19, 2013