Shopping with a stroppy teenager and 3 younger ones in tow, a quick look at our annual Harrods pilgrimage, Irregular Choice shoes and too many takeaways!

Today OH took William to nursery, which was nice as it spared us the cold walk up there this morning. However I still had to endure the task of taking a 15 yr old shopping. Had we been on our own we may have been fine but we had groupies, in the form of 9 yr old, 6 yr old and bubba in his pram. Bubba decided from the word go that, even though he had been up since 6.30am and it was now 9.30am, he wasn't going to  sleep even though he was tired. So he was fussing, moaning, crying, until he eventually fell asleep. The 2 older girls disappeared into the girls clothes department whilst I was with the teenager deciding what clothes to buy and moaning cos they didn't have any pants in his size, oh the joys! We made it out of the first shop only mildly stressed although by now the 9 yr old had begun to think about her stomach and when this happens you have a regular 'I'm hungry' update about every 5 seconds. The teenager had opted for the escalators as a means of escape as we had to go in the lift, even to him 20 seconds respite is bliss. Anyway, the rest of the shopping went OK but my stress levels rose increasingly because of the hungry 9 yr old and the grumbling teenager. To end a 'successful' shopping trip I tried a bodywarmer on in the last shop and I couldn't do the zip up so me and teenager had a giggle. 9 yr old asked what we were laughing at and teenager goes 'Cos mums a fatty'! Yeah nice, realllll nice!

Whilst dragging the kiddies around I did stunble across a new shoe shop in town, we wandered in and browsed. Converse and Vans were amongst the offerings which is always a good start but then OMG, Irregular Choice shoes. I am yet to own a pair, I am usually too busy drooling over them instead as I have nowhere to wear a pair. If I bought the pair I saw today I could hardly use them as my school run shoes! They were these babies! 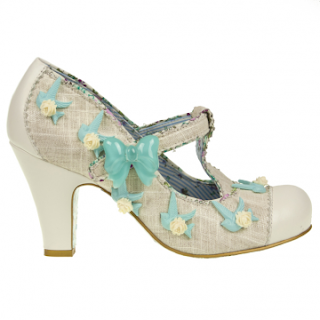 Oh if I could wear them on the school run I would. :-)

Talking of shopping in an around about way, every year at Christmas we make our way to Harrods. This year was the first year in a long time that we actually ventured into a few other departments rather than the usual toy and kids clothes departments! We went through the food hall, through the lighting, not a wise choice to put the Disney restaurant in a place where you have to walk children through the chandeliers that are hanging low for people to look at! OH wanted to go and look at the watches, hmmm dragging 4 children through the fine watch department! We weren't there long, I asked where the swatch watches were and got a blank stare (joke!). However, OH went to drool over his Omega warch that he wants and after I pointed out that if he bought me the £20,000 watch I had seen he could have his Omega, we promptly left! Our main purpose of this trip is to visit Harrods Santa's Grotto. The kids love it, we buy photo's for the relatives, they go and raid the toy department, Ella got overly excited in the Disney Kingdom and we had a fab lunch at the Disney restaurant. For one day a year we can pretend we fit in to the Harrods lifestyle! This year Ella also met Jack Dee and I got a photo. OH told me not to bother him whilst he shopped, so I lost hubby and went back and asked. Hubby then stropped that he didn't get a photo with him, make your mind up! 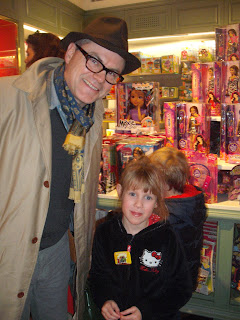 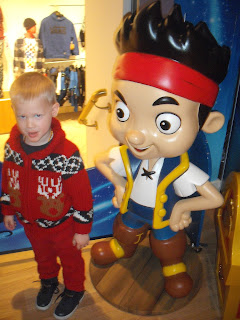 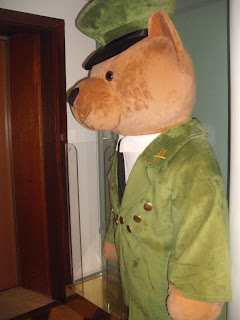 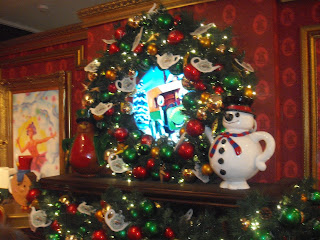 Oh what fun, I love Xmas. Maybe I shouldn't be talking about it the middle of February!

So now as I end my blog I confess to have had too many takeaways recently. We aren't talking every night, but 2 a week (sometimes 3 but very rarely), which I still think is too many. We vowed not to have too many in January, which worked but maybe should have carried on that commitment for the rest of the year. I am going to burn the menu's and hide the phones, yeah right. Takeaways are too easy and convenient when the last thing you want to do is cook after running around after the kiddies all day. I will voe to stick to only a couple a month and see how we go?! However, this may be the reason why I couldn't do the zip up on that jacket earlier and so I am a Fatty!!

One final plea to everyone reading! Please click on the link and vote for OH to win a BMW, he is fed up of driving a people carrier! Thank you. http://bit.ly/WafH3B