So OH has had the week off work, which seems to mean I have one more person to look after. However he has been so busy going all guns blazing with the extension that we have hardly seen him all week even though he is only outside the front door! He has spent most of his time digging the trenches for the foundations which meant the arrival of a digger. The kids got all excited but were quite disappointed with the digger we got. I think they thought a huge JCB was going to come ploughing down the road, however what we got was a little sit on digger than chuggered along very slowly and steadily. It was left in the capable hands of my Dad to be the driver and he did a fab job. Not only running his own business and looking after his own work, employees, home move etc... he has been here every day this week to help out. I love my Dad, I don't know where we would be without him, well probably not ready to be pouring concrete tomorrow that's for sure. 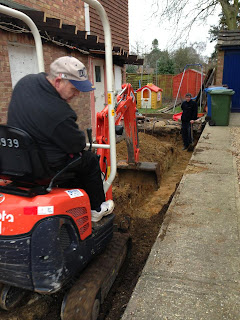 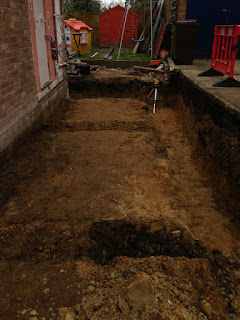 Concrete, eeek! I was on hand as OH's secretary to make the phone calls as OH has phone 'phobia'! I then have to relay conversations between the person on the phone and OH because I have no clue what I am talking about and really it would be easier if the two people just spoke to each other themselves. Anyway, it's ordered and arriving tomorrow and we have half an hour to pump 20 million (slight over exaggeration) tonnes of concrete into our trenches, this is after we have had the building controls, inspector, surveyor guy visit to give us the all clear to do it. I have a headache just thinking about it!

Raising teenagers, how do people do it?! I can imagine any teenager is a nightmare to raise, I know I probably was! My eldest is 15 yrs old and at the moment he hates us all, we are all in his way and we are annoying. He is going downhill at school too and he can't see that he is doing anything wrong. He wore the wrong shorts for PE the other day but it wasn't his fault, he swore at his teacher yesterday so was excluded for today, but that wasn't his fault?! and he has toothache but eats sugary foods and doesn't brush his teeth, and that's not his fault either!!! OMG, I thought all was OK, we were getting there. We hadn't had any problems from school for a while, you think you are all fine and then it all just blows up in your face! :-( What with him and our 9 year old having a 15 minute full on tantrum this morning because I wouldn't get her clothes for her to get dressed I am close to being carted off to the funny farm! Thankfully, Ella floats through school in a world of her own but keeps her head down and is doing fine and William has really settled well into nursery life. We now have daily sing songs of Soldier, Soldier yet when asked his favourite song at nursery he replied with Gangnam Style, how embarassing! He could have at least chosen Pink, Please don't leave me or Coldplay, Paradise. Our children are quite good with their music but to choose Gangnam Style as your favourite song, I think he needs a bit more musical guidance!! Here is a picture of the three boys, looking like butter wouldn't melt. This is the first day they all met, the day Blake was born. Our eldest was lovely that day, so kind and helpful. He can have days like that and then days that you wonder why you didn't call him Kevin, cos 'It's sooo unfair'! 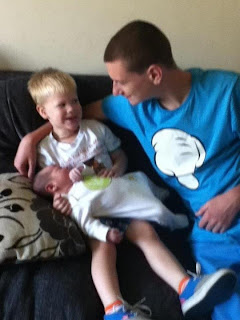 Awwwww, Blake was about 12 hours old in this picture, seems like only yesterday. He was born just after 1am, I was home by 5.30am, went to bed for a couple of hours and then woke up to my daughter in the bed next to me as it was her birthday too. I gave her a brother as a birthday present, what more did she want?! He is now 6 months old already, where has the time gone?


Over the next few weeks I will be doing a few product tests and reviews. At the moment I have a Mam Soother to test drive, well Blake has! I also have some Vital Baby weaning products on their way and a Bambino MioSolo cloth nappy. Once my reviews and thoughts are published by the companies I can then also share them in my blog. Hopefully I can start doing this as a regular thing if I can get other companies to ask me, I will keep you posted of any more reviews I am lucky enough to participate in.

For now, that's me, I was meant to be watching a film with OH but as I was writing this I have not followed the plot at all and now I don't know what is going on, so may retire to bed instead before the baby wakes me up again!