Why it's important to have some child free time. Birthday celebrations & our time away in London.

Yes I know parenting isn't a job. It's something we chose to do. However, just sometimes on very rare occasions you need some time out. You need to forget about everything even just for an hour or two and sit without a child hanging off of your leg or wanting to share your food.

A couple of weeks ago was a big birthday for me (21 if anyone asks!) so I planned some time away in London. Nothing amazing, just one night with the days either side to get out and about whilst there.

It's always difficult to get time away or alone when you have children. When there's five of them (well four younger ones) it's difficult to co-ordinate childcare for them all. I would say nobody wants to look after them all but I know my parents have looked after all four of the younger ones over night in the past which I am always truly grateful for them to do.

However, it's always easier to split them up between grandparents so this time we sent the two older girls off to Dadof5's parents and the two younger boys off to my parents.

Time away was very much needed. Not just because it was time to celebrate my birthday but also because we don't get away enough, or at least out in the evenings enough just the two of us.

Life has become so 'samey' and routine. Take kids to school, come home, housework, afternoon school pick up, homework, dinners, bath time etc.... By the time the kids are in bed I just want to sleep! Myself and Dadof5 tend to spend our evenings separately doing our own thing and although we do both have a night out each week it's not together.

Most conversations revolve around the children or work as that all life seems to have become recently so we were ready for some time out from it all.

We headed off into London on the Sunday. Dropping the kids off at the grandparents early and away on the train by lunch time. We were treated to first class train travel from South Western Railways which I am so grateful for. Roomier seats with a recline, charging point for my phone (very important as it's always low on battery!) and a seated table area made for a roomy ride into London. We are so lucky to live in a town with a mainline link direct through to London Waterloo so we were in the capital within the hour (due to be Sunday services) but on a weekday the fast service takes just 34 minutes.

When we arrived we headed straight to our hotel to get rid of our bags. Whilst we are on the subject of bags. I asked Dadof5 to pack a bag for our trip to London and this picture below shows what he packed! We have a couple of wheeled suitcases that are small enough and ideal for a trip away to London for one night but he decided that a pear bag will do. 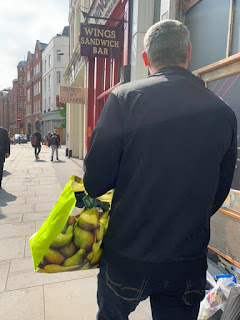 The 'must have' pear bag of the season


We opted for the Covent Garden Travelodge. I was going to book a hotel we had stayed in before near St Pauls but we only needed the room for one night and weren't in the room for long at all. The Covent Garden Travelodge was amazingly priced for it's location and I would definitely stay there again. We had one of their new Super rooms which was spacious and comfortable with kettle and coffee maker, TV and shower room. 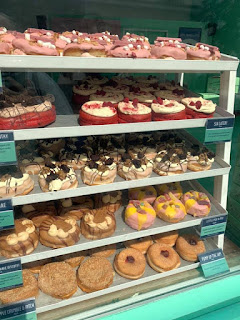 I spotted these gorgeous doughnuts in a Donut Time shop near Covent Garden. I will go back and buy one!


I had planned to head out into the city that afternoon but after falling asleep instead we wasted an afternoon of sightseeing and shopping. I was mad with myself for doing this but we are parents who needed sleep!

We had booked dinner at Zizzi's which my sister had kindly gifted me for my birthday so we enjoyed a lovely three course meal with a glass of wine.

The next day was my birthday and I had planned to shop. It's not very often that I go into a shop and buy something for myself. At home I love online shopping but it's still never for me and always for the children.

We headed to Selfridges as I had one purchase on my mind. Dadof5 armed with his pear bag and me with a look of despair on my face as we headed into the 'posh' shop! If you see Gucci debuting their new pear print handbag on the catwalk next week, Dadof5 styled it out first! 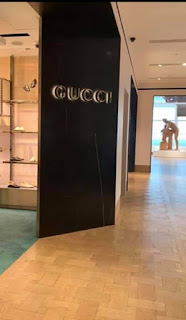 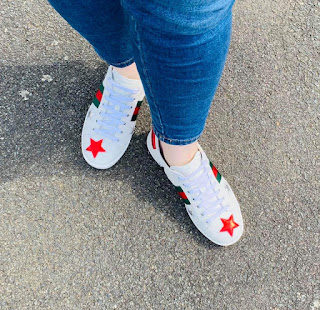 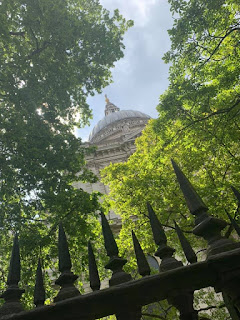 After a bit of shopping we headed to St. Pauls Cathedral. Despite having had two family christenings there I still hadn't seen the main part of the cathedral and have always wanted to visit. Again my sister had gifted us tickets to go into the cathedral and we decided to head up to the viewing galleries. Wow, I am out of shape! The view is amazing so if you do get the chance to go there be warned the stairs are a killer... all 3 million of them. 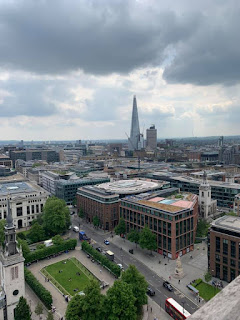 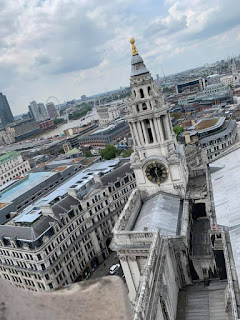 Well worth nearly having a heart attack for these views!

After a bit of lunch we headed back home as I had promised the children we would be back in time to pick them up from school. As it was a week day the trains were a lot faster between London and home so we didn't have to leave until mid afternoon knowing that the train will get us home in super quick time. It was a short visit but enough to relax and recharge. Enough time to fit in a bit of shopping and dinner out without having the children to worry about and some time to ourselves.

When can I go again?!