Book review and competition; Michael Murpurgo's An Eagle in the Snow children's book and one copy to give away.

AN EAGLE IN THE SNOW BY MICHAEL MURPURGO 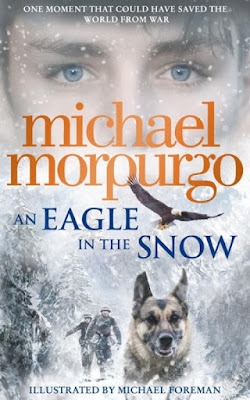 The powerful new novel from the master storyteller, Michael Murpurgo. Inspired by the true story of one man who might have stopped World War II.
1940. The train is under attacks from German fighters. In the darkness, sheltering in a railway tunnel, the stranger in the carriage with Barney and his mother tells them a story to pass the time.
And what a story. The story of a young man, a young soldier in the trenches of World War I who, on the spur of the moment, had done what he thought was the right thing.
It turned out to have been the worst mistake he ever could have made – a mistake he must put right before it is too late…

Published in October 2015 and ideal for ages 9+ the book comes in hardback and has 272 pages.

My daughter, aged 12 years, absolutely loves Michael Murpurgo books and has built up quite a collection so as soon as our copy arrived she jumped straight in and hasn't put it down since.

Thing 2, aged 12, says; I was keen to get straight into the story as I know what a great writer Michael Murpurgo is. The historical storyline was captivating and emotional and gripping enough to keep readers enthralled in the book and not want to put it down. The storyline was realistic and had great detail and you could really connect with each character. As student librarian at my school I will definitely be recommending this as a book for other students to read'.

I have one copy to give away to one lucky reader, all you have to do is enter via the rafflecopter below.

a Rafflecopter giveaway
Posted by Mumof5StaySane at November 24, 2015

Email ThisBlogThis!Share to TwitterShare to FacebookShare to Pinterest
Labels: an eagle in the snow, book review, competition, giveaway, michael murpurgo