Review; Drumond Park Games Barbecue Party, pop up fun for all of the family. Who will become the master chef??

We were recently sent the game Barbecue Party from Drumond Park Games. The older children have plenty of games to play so it was nice to get a game that all of the children could play, even the younger ones.

Barbecue Party comprises of a barbecue with pop up action, a set of cards, various different barbecue foods and a set of tongs. There are two of each food including broccoli, peppers, tomatoes, mushrooms, chicken drumsticks, fish, corn on the cob and hot dogs. 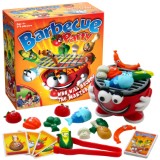 The aim of the game is to be the first person to collect three foods off of the barbecue, four food items for the older children.

You start the game with all of the foods set aside from the barbecue and the pile of cards face down. each player in turn picks a card and whatever food is shown on that card is placed, carefully, on the barbecue. if a player picks a card that has a particular food on that is already on the barbecue they can carefully remove it and keep that card and the food. They need to do this 3 times to be the winner.

However, the barbecue has a popping action and if a food is placed on the barbecue or removed without care it could pop and send the food jumping into the air. If this happens all the food has to go back off of the barbecue and you start over again.

There is a Joker card that is in the pack of cards, if this is picked up the player can choose which item of food to either place on, or remove from the barbecue. If a card is picked and both food items have already been claimed by other players that player misses a go.

To set the grill on top of the barbecue there is a small switch that you set to 0 for placing the grill on then set it to 1 and it is ready to pop during the game play.

My children absolutely love this game. When we first played it we could play as a whole family, once we had played it a few times the younger ones picked up the rules so easily and now they will happily and unbox it and play it together without needing any help. Sometimes we do have a cheat game where we don't have the barbecue in popping mode!

When it arrived there was also very minimal assembly required to get started. The box includes a sheet of eye stickers for the food but apart from that you could get started straight away with game play.

For 2-4 players age 4 years and upwards. Thing 5 who is 3 years old loved playing this too though and it was so easy for him to follow and play. RRP £19.99

Disclaimer; We were sent the game for the purpose of this review, all views are our own.
Posted by Mumof5StaySane at September 22, 2015