Power Rangers has always been part of my life. My eldest is now 18 years old but even when he was growing up Power Rangers were a big thing. Power Ranger toys and the TV series has always had it's fans over the years and remains well loved by children around the world.

When we were sent some fab Power Ranger Dino Charge products from Bandai UK my five year old got very excited. The 22nd series of Power Rangers has just aired recently on POP kids TV. Starting on August 31st 2015 at 7.30am. 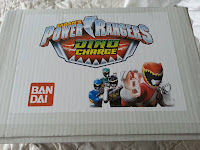 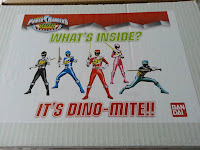 Bandai toys have launched a Power Rangers toy range to coincide with the new series of Power Rangers Dino Charge. Including the various sizes of articulated figures that come with battle accessories there is also the deluxe dino charge morpher, dino charger power packs, dino charge cycle, the dino charge Megazord and much, much more.

We received the black Ranger with distinctive dino charge detailing and two battle gear items. Standing 12.5 cm tall it has a detailed design and 13 points of articulation for role play with other Power Ranger toys.

Thing 4 was particularly excited about the dino charge Megazord. With three ways to play with 3 different dino zords which then combine to make the impressive Megazord toy. It also came with 1 Dino Charger for extra morphing features and this can also be used in the dino power chargers and dino morpher. The smaller dino zords are ideal for multi game play and it also means that there are more toys for everyone to play together but it is very impressive when they all morph and combine to build a very big Megazord action figure. 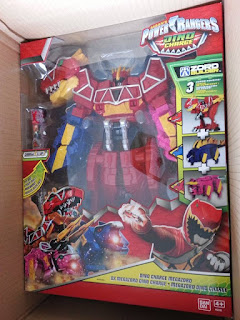 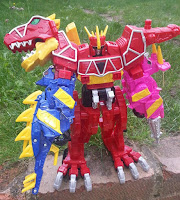 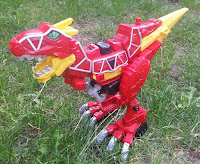 The Megazord complete and also in it's three smaller dino zord stages too.

Now showing on POP TV at 7.30am and 6pm every day, be sure to catch all episodes of the new Power Ranger Dino Force show.

All Power Rangers dino charge toys can be found in Toys R Us, Argos, Smyths Toys, Amazon and more stockists too. On the run up to Christmas and with the new TV series well under way these toys are a must have for any Power Ranger fan.

Disclaimer; We were sent the Power Rangers dino zord toys so we could write about the launch of the TV series and toys. All thoughts expressed are our own.