Update on home life, New Year, January blues, my attempt to lose weight and become a yummy mummy not a slummy mummy! and what we have achieved in the year since my blog began.

I wanted to say Hello as I don't feel like I have done for a while. I've done a few review posts but not actually written about how life is going. It's probably not best to start writing that post when you are in the depths of the January blues though!

This year I have decided that my goal is to lose weight. I have started my local Slimming World group and I am slowing (very slowly) losing weight. As there is going to be no more children I have decided to try and regain some parts of my poor broken body and become a yummy mummy not a slummy mummy. Easier said than done but I need a bit of me back for myself if that makes sense. At home I am Mummy, in the school playground I still don't have a name as I am called Ella's mummy or William's mummy, I do the usual mummy jobs at home and I look after the children but I feel I've lost myself. I've become comfortable in the body that I have and along with that comes the essential slummy mummy wardrobe of comfortable trousers and tops all in a different shade of dark. I need to snap out of it and do this for me, make myself feel good again and enjoy life as my babies grow up.

Talking of my 'babies', in the past couple of months I have had to apply for one Infant school place and one Secondary school place for this September. It's scary stuff I can tell you. If that wasn't bad enough I have one in college now too. Enough to make you feel extremely old! We are so proud of what our eldest has achieved in the past year.

At the age of 9 years old he was diagnosed with ADHD with autistic traits. His current Junior school that he was in told us they didn't want him back in the following September (nice!) and so for his last year of Junior school he spent his time split between a new school and a specialist education centre who were able to help him. From there we were advised by some people that he needed a specialist secondary school but we didn't believe it and he went onto a mainstream secondary school with a statement of special needs. He had 15 hours help a week although it seemed like the school gave us much more help than they needed to. All of the teachers were so helpful and supportive. They all had time for our son, we had regular meetings, they phoned me for anything and I did the same too. They put up with my sons 'quirky' behaviour, the trousers tucked into the socks, the little noises he made in class. All of which did stop at certain points. Yes, he got in trouble but I'm sure no more than any other teenage boy or girl in that school and probably less than some too! He forgot homework constantly and most days he didn't even have a pen because he had left it somewhere the day before. Despite all of this he got through five years of secondary school and last year past his GCSE's and got into college. I would like to go back five years to the people that said he wouldn't do it, but we look forwards not backwards. I also can't thank the teachers of that school enough for getting him through to his GCSE's, I don't know where we would be without them. This takes us on to where he is now, college. We are so proud of his achievements, I'm sure he still doesn't have a pen when needed and he still won't take a bus on his own so walks over an hour to get there in all weathers. He hardly sleeps still and he struggles to get up in the morning without help but we wouldn't change him! Well done on a fab year from our eldest child and yet still more challenges that I am sure he will throw at us. Also a big shout out to the Farnham Knights american football team that he has joined. Again, it's a struggle to get him there some weeks for training and I am looking forward to hopefully see him play in some matches but it is a huge achievement in itself for him to have become part of a team sport and motivate himself to get involved. 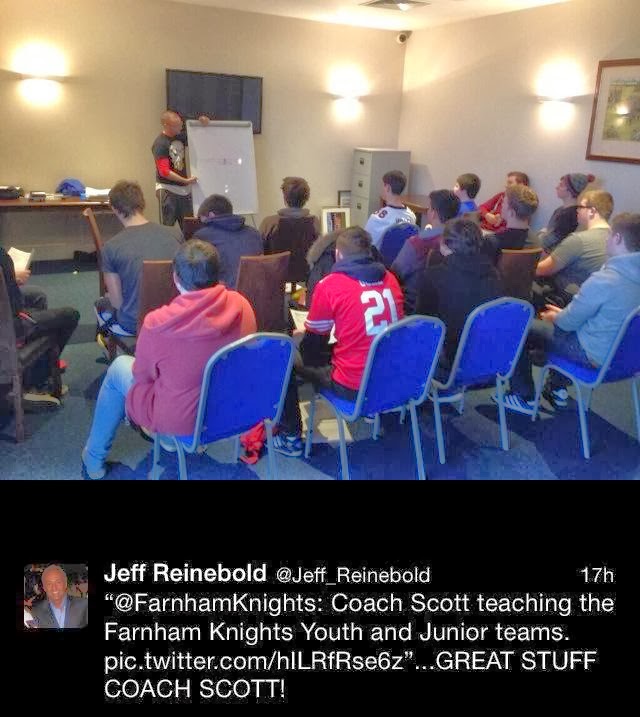 So as eldest child moves onwards and upwards so do the others. Why can't they stay small? Next year I will have one child in each of the Infants, Juniors, Seniors and College and I will be looking at Nursery school for my youngest too. I will be a redundant Mummy as my babies fly the nest to get their own little bit of independence at school. What then? What do I do? I'm Mummy, I have been for the past 17 years nearly, when there is no children at home I will then assume the role of 'clean up operation after a major incident' AKA life with children, but why do I bother when 5 minutes after they arrive home from school is it a bomb site again?! Of course I will still be needed to look after them for many years to come and when they need money or when they need their clothes washing! 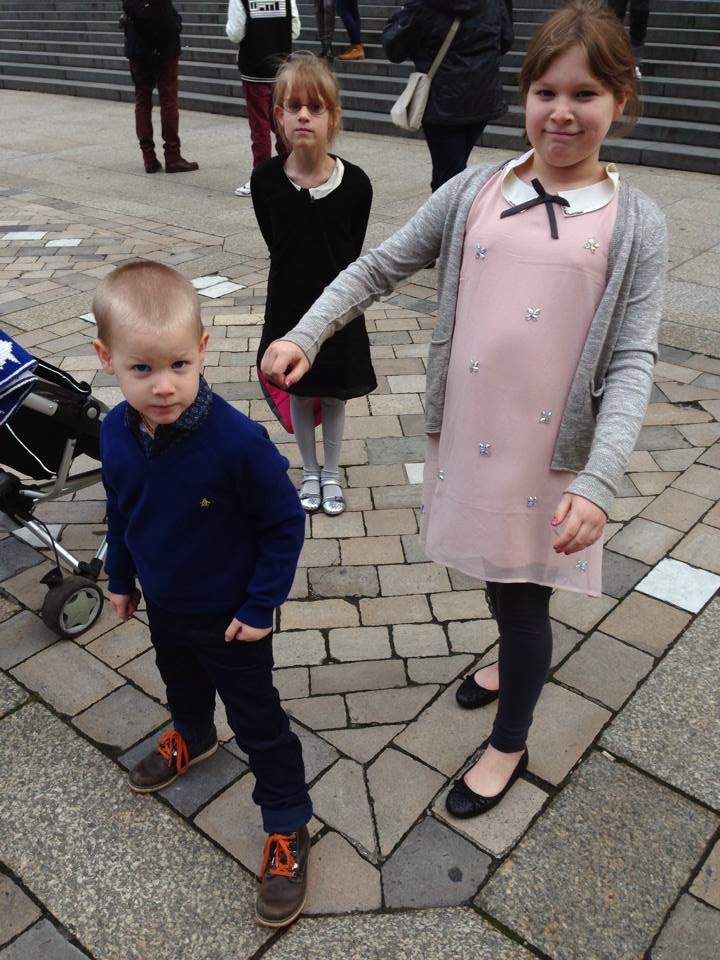 October 2013, my middle 3 outside St Pauls Cathedral where we were attending a family christening. 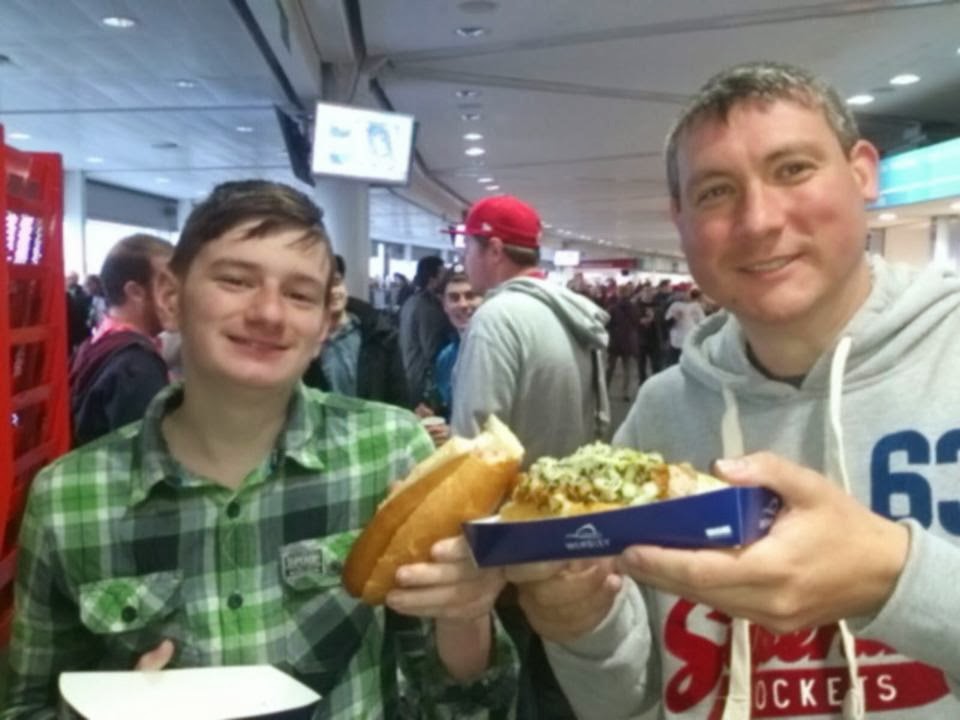 OH and eldest at the NFL match at Wembley last October. Another match booked for this year too, they loved it!


Along with all of the ongoing tidying, cleaning, washing, cooking etc.... Is the ongoing extension work! This time last year we had just received the go ahead from planning permission and were digging the foundations ourselves. Since then the build is complete but there is still so much internal work that needs doing. This is a job that could have been done in a few months if we had the funds but doing bits and pieces ourselves means that it is still an ongoing project. My main gripe bring that we still don't have our second bathroom and it is currently a storage room. We really need it but at the moment funds say otherwise. I just want it all finished now! Slow and steady definitely seems to be the motto for this project! :-( 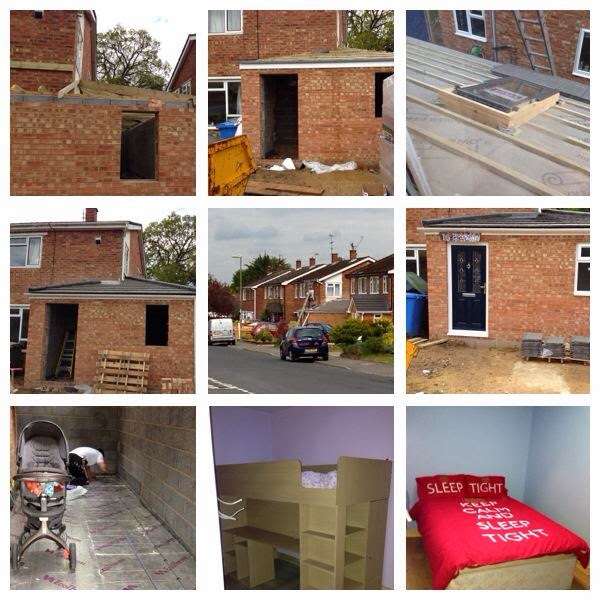 Extension work so far, both new bedrooms complete and occupied. Outside needs tidying up (still trying to persuade OH that we need astro turf in the back garden!) and new bathroom still needed!

Alongside various other family outings, family gatherings, birthdays etc.... the past year was a whirlwind of mostly house renovations. OH would work all week then at the weekends helping on the house and the year just disappeared.

This year I am looking forward to getting it all finished, more family gatherings, outings and watching the children grow even more than they already have. Oh and losing that weight!!!! 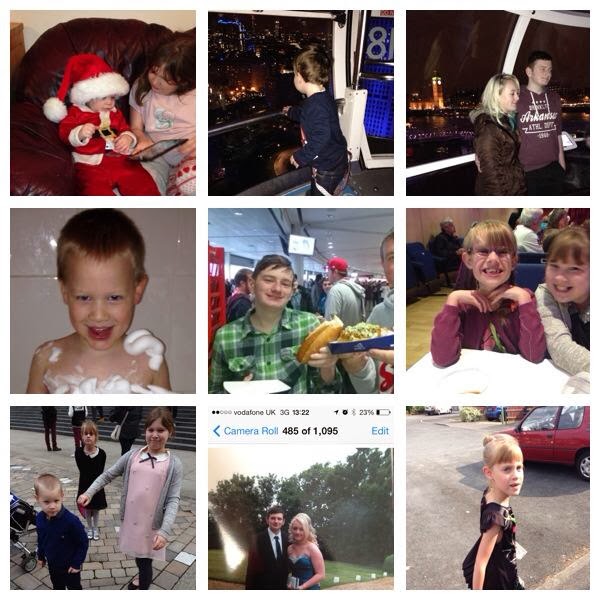 Some pictures from throughout 2013.