CAUTION Stay away! Sickness bug, Five children and It, It being a frazzled Mummy and a Daddy who says he feels ill, argh! Oh and my rare day/night out, afternoon tea and Rock of Ages.

So I nosedive head first into a blog post whilst I have five children under the influence of a sickness bug.

As if my washing machine doesn't see enough action as it is, it is currently working 24/7 covering extra shifts for his washing machine friend who has yet to grace us with his presence in our utility room.

Poor OH was left on Saturday so I could enjoy a rare day out for my besties birthday. I left him with one sick child and all he had to do was make it to bedtime with all of the children still alive. By the time I had reached London and was heading to Afternoon Tea in Covent Garden he was already messaging me to tell me that he had a man down! Our poor 3 year old was now being sick, OH did inform me that he had sat said 3 year old in front of the cricket and I came to the conclusion that this is what may have made him sick, either that or cricket tends to induce sleep!

Anyway, Afternoon Tea was lovely even if it was spent receiving messages from the OH with updates on the emergency hospital he had set up at home. We went to The Crusting Pipe in Covent Garden. It was soooo busy in Covent Garden itself, everyone was enjoying the various street artist or wandering around the market looking at the various treats on offer. There were 9 of us ladies who lunch in total and a fab afternoon was had. Afternoon Tea consisted of crayfish sandwiches along with buffalo mozzarella and tomato, salmon and cream cheese and also ham, cheese and pickle. Followed by scones and petit fours, or fancy nom noms as I said! All washed down with a couple of cups of tea. We chatted for ages about work, home, wedding plans, weddings just been,  and the all important birthday celebration we were there for, its not often your bestie turns 29 (again!). 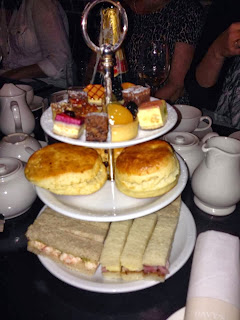 Scrummy Afternoon Tea thanks to The Crusting Pipe, Covent Garden

Afterwards we walked through the market, and on to our theatre destination. Being slightly early we found a bar nearby to have a drink, who wouldn't?! By this time I had an update from OH that the baby was victim number 3 to the sickness bug, he had blessed Daddy with the honour of being puked all over just so Daddy knew for sure that he was unwell. I was doing my best to reassure OH via text message that all would be OK, I couldn't say I was going to be home soon because I wasn't and hope the evening goes as well as it can?!

The show was amazing, Rock of Ages, go see it if you haven't already. Full of songs that everyone knows even if you didn't think you did. We were singing along and lots of laughs too. The evening was ended by eating chinese in a box, which the bestie was really pleased that we found and it tasted good too. Our journey home was spent discussing what our super hero power would be, a very important issue to discuss right??!! 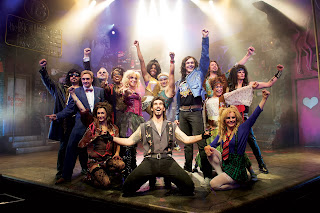 Rock of Ages cast, they were all brilliant

So from Saturday onwards myself and the OH spent our time playing doctors the various sick children, as well as a full on clean up operation every time one of them was sick. (Yuk!). This has gone on from Saturday until it ended (hopefully!) yesterday. Today, Thursday, is the first day that our 3 year old has woken up looking half human, it hit him hard and the poor wee one has been ill all this time. Mummy was hit by it on Tuesday and I spent the day trying to die in bed whilst dealing with everyone else being ill too. OH came home from work slightly early to help out and, luckily, hasn't been inflicted with illness yet. A) because we needed one well person to help everyone else and B) there is nothing worse than an ill man!!!!

Next blog post will be much cheerier and I refuse to let anyone else be ill in this house for a good few months at least!!! :-)