The start of the Easter Holidays, but we have chocolate to help us through! NEW Disney Shake it Up album review. Weaning success for baby. Choosing a new climbing frame too!

I have neglected my writing again. After the success of my Silver Cross post which I was very pleased with, I then haven't posted for nearly 2 weeks. The time flies by, I can't fit everything in and my blog gets neglected. Sorry blog. :-(

Anyway, the Easter Holidays have begun. They started last Thursday when all of the schools had half days. I had one child finish at 12pm, then onto the Infant School for Spring Assembly at 1pm before a dash across to the Juniors to collect another child by 1.30pm then home where my eldest was home already. Spring Assembly was lovely, it's always nice to see the children come together to sing for the parents, however keeping the baby and toddler quiet throughout is another mission altogether! Our daughter also won an Easter egg in the raffle which was nice. Our 3 yr old also got some chocolate eggs and chocolate bunnies from nursery, but they didn't even make it home!

Trying to write a post on the first morning of the holidays was silly of me. They are already fighting and arguing, mainly the 9 yr old winding everyone up. I must find some chimneys for her to go and sweep, that will keep her busy. So, we had Easter weekend at the beginning of the holidays which means we have plenty of chocolate to keep us sane, I didn't get any eggs but the kids ones will keep me going for a while.

DISNEY'S SHAKE IT UP ALBUM REVIEW

We were lucky enough recently to receive a copy of the new Disney Shake it Up music album to review. My 2 daughters both watch the programme on the Disney Channel and they love it.

Shake it Up is an American TV series airing on the Disney Channel. The series was first shown on November 7, 2010. It stars Bella Thorne as CeCe Jones and Zendaya as Rocky Blue as they star as background dancers on a local show, Shake It Up Chicago. It also shows their misadventures on and off set, and their troubles and rising social status at school. Davis Cleveland, Roshon Fegan, Adam Irigoyen, Kenton Duty and Caroline Sunshine are also the other main cast members. 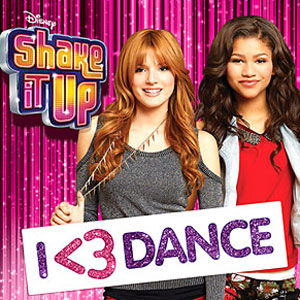 So we listened through the album, there was a lot of dancing  from the girls, and Mum (and Dad!). The song list is as follows;

As you can see all of the songs are sung by either cast members from Shake it Up or other Disney Channel regulars. Its an upbeat catchy album full of funky songs by well known characters that the children will love. My particular favourite is Contagious Love whilst my 6 year old likes This is my Dance Floor and the Shake it Up theme song and my 8 yr old likes These Boots are made for Walking. I have found that my 2 girls could quite happily dance their way through the whole album, there was no skipping songs like you get when they play other albums. This is highly recommended for any Shake it Up or Disney Channel fans. The songs are also fab and funky for any dance class too. Fab tunes for the summer, I am sure this is going to be blasted out of the speakers whilst we have dance clubs in the garden with friends!

On another success story we have had weaning triumph from the baby but no sleeping through the night triumph! Now eating 3 meals a day but still waking in the night for feeds, where am I going wrong? I need my sleep back. I am walking around like a zombie, my brain is almost dead, I snap at everyone and the OH says I wake up grumpy and that's me for the day. I have done the night feeds and first wake up call of the morning for nearly 8 months now, I would like to see how he would look after all of that!

So, whilst the children are almost killing each other already my mission for the day is to find a climbing frame, so I can at least chuck them out in the garden to play rather than having any blood spillage on the carpets! I found the perfect one, I wonder if OH would protest much??! And the neighbours as it would have to go in their gardens too!!