The perils of raising a teenage child, turning to Cadburys chocolate for help. Potty training a boy and my burst water pipe nightmare!

Teenagers, bleurgh. It's those things that the cute baby that you brought home from the hospital, cuddled in your arms, fed, changed, clothed etc.... turns into. Then you find yourself doing all of the same things for said teenager that your were doing when they were newborn, however in the teenage years if you don't do it, or don't do it right they are sure as hell going to let you know about it.

Our teenage son has been getting gradually worse over the past few weeks. His language is awful and his attitude towards everyone stinks. We have tried talking to him, we have taken the Xbox away but nothing is working. It got to the point yesterday where I had to sit and listen to him tell my OH that he loves me but he doesn't like me. Now I know, as everyone has said, he is a teenager and they say these things and many more mean things and to not let it get to me, and I shouldn't, but it did. I am sure there are teenagers out there that have done a lot worse but when it's your own you can't help but let it get to you. It's causing arguments between everyone and he seems to be hitting all the right buttons.

This is a before and after photo of his room, this was last year. He chooses to live like this as his room is in the same state now. In the end I had to tidy it, at the time I was 8 months pregnant, not in the mood for tidying up someone's room when they choose to live like this, but I did. I even lifted the bed to clean underneath it. I am embarrassed to show the photo's but it's him that does it, we don't want him to live like that but if he doesn't tidy it or not make it messy in the first place then it's me that is left to sort it out. The picture at the bottom is the girls room, just to show that rooms can stay tidy, although that's my handiwork again, and it doesn't look like this at the moment! 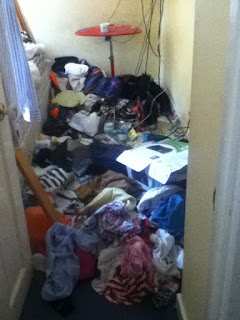 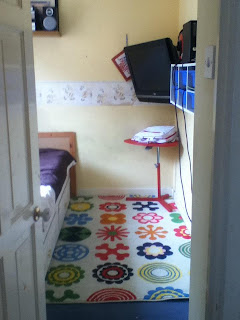 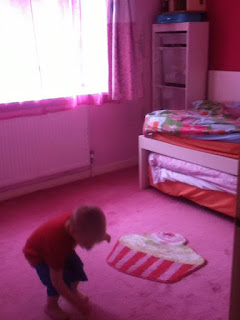 At my wits end!

To top that off my Mothers Day was rubbish. I have read blogs and had my FB news feed filled with wonderful Mothers Days, oh we went here, we did this, I got this, they made me breakfast in bed, blah, blah, blah. Well from now on I am cancelling Mothers Day, Fathers Day, Easter, Birthdays, Halloween, Christmas and every other such occasion where someone needs fussing over, presents bought, and me to be nice to them. No more Mrs Nice Guy!

Onto our 3 yr old, who still hasn't mastered the art of using the toilet. So over the weekend we decided to put him in pants. I refused to let any accidents stop me from carrying on and reverting back to nappies. He did OK. He used the toilet, we did have a couple of accidents but nothing major, we just need to crack on and do it before he starts college and is still in nappies. I was hoping that the Angry Birds boxer shorts that he chose to buy over the weekend would work and I think it helped, he even had to show Nanny and Grandad his pants, lol! I am hoping it still goes well and we can crack this in a few weeks, she says!

Anyway, rants over, this doesn't make for a very good blog read! I have over indulged with tea and Cadbury's Oreo chocolate as chocolate and cake makes everything better. Here is a couple of pictures of cakes I made last year, pre baby. I don't have the time any more but wish I did. I would whip up a batch of cupcakes or some banana bread in no time, but now I have NO time it seems! Must get baking again! The two below were for Jubilee weekend and our 6 yr olds birthday and they were scrummy. I also made one for the teachers at the end of the year but forgot to take a photo, it was milk and white chocolate fingers around the outside and aero bubbles on the top, just imagine it!!! Nom, nom, nom! 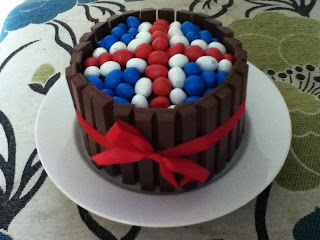 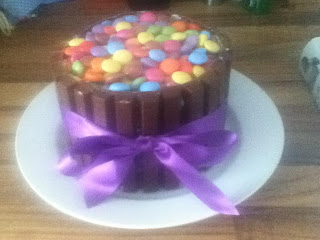 Talking of chocolate, I was prepared this year and have already got a stash of Easter Eggs ready but now I have cancelled Easter I may as well eat them all! There is no worry about getting fat either as the button fell off my jeans the other day and my leggings have holes in them so have a little more give now, which is handy if I am going to eat 12 Easter eggs and 3 tubs of sweets. I wonder if the china Mario mug is edible, worth a go I suppose!

My last rant is dedicated to the water pipe that bust on me this morning. It spewed out all over the foundations that we have put down so we now have the swimming pool that I wanted. Not so good for the builder starting work today. I couldn't turn the water off as the tap was stuck so I called on OH who didn't answer his phone, my bro who was busy, my Dad who was with my bro and then back to OH who came home to sort it out but by then we were flooded!

After putting you through that long ranty blog post I make my apologies and promise my next blog posts to be more upbeat and useful. I am due to write a review on www.americansweets.co.uk and their shop and am still to finish my reviews on some products I have here too, all to come very soon.

I hoping my Blog today is worthy of me winning a guest spot on www.saffsrants.wordpress.com. :-)